Back home now and have had time to reflect on the Jungfrau marathon. I can confirm it's very scenic and very tough. I was in Interlaken for a week before the race and did some easy runs along the lake and through town and also spent time going to some touristy areas including the Schiltorn at 3000+ metres. It was hard to resist the temptation to walk up lots of mountains, I also thought about doing a tandem paraglide but thought I'd probably just hurt myself.


I met up with the other Aussies on the Friday and checked-in to the athletes hotel, I ended up having a room to myself because Gerard Robb was injured and didn't turn up. I was between the Russian and Polish teams, just across from Ukraine - not sure why. On Saturday I went to Lauterbrunnen to watch the Aussie women then went back home to take it easy.

Race day was sunny and pretty warm and I did a quick warm-up. Gerard Robb appeared and we had a quick chat before the race. The race is limited to 4000 people but because it was the 20th anniversary they had a Saturday and Sunday race with 4000 each with the elite woman and vet males on the Saturday and the rest on Sunday. Great atmosphere at the start but still pretty relaxed, I got away well and just sat in a big group while the leaders set a cracking pace. I think 5k was abut 17:30 then I dropped off the group and cruised through 10k in about 36:30 feeling pretty comfortable on the dead flat start to the race.

I'd spoken to a few of the USA team the day before, good runners and a couple had run the race before and they said you had to be feeling pretty comfortable at half-way so that was the plan. The rolling hills picked up after 10k between Wilderswil and Lauterbrunnen, the course followed the river up the valley and we had a great view of the big mountains in the distance. Huge crowd at Lauterbrunnen was great, lots of noise and cheering, just like a big city marathon. Went through half-way in about 83mins so I'd slowed down more than I was planning but now I was just trying to keep it nice and steady and I could still see the guys up ahead including Galen Burrell from USA who came 5th here a few years ago so I knew I was in a decent position even though I was about 40th at this stage.

The main climb starts at about 25k and from there the course is basicall uphill to the finish with varying degrees of steepness. 25k is where the km markers disappear and are replaced by 250m markers, 25.0km then 25.25km, 25.50km...it's pretty scary especially when it's a few minutes between each one. It's about 3k of REALLY steep running, this is where I struggled and never fully recovered. I also had a steady stream of people pass me from here on, just ones and twos but there is such depth in the race you're never really on your own. I walked and ran while everyone else seemed to be running.

Another huge crowd was waiting at Wengen at about 30k, it's here I realised it was only about 12k to go but I still had a long time left. The sun was up now and it was pretty hot, I'd read somewhere some marathon tips by Frank Shorter, he said never to use sunscreen in a race because it affects the ability of the body to regulate temperature. Probably shouldn't have listened to Frank today though, I could already feel the sunburn starting. That was the least of my worries though, the course is a lot better after Wengen, lots of flatter sections amongst the steep hills but no real let-up. I was drinking a lot now and from here on it was just a mental battle. I was reminded of my first 6 foot track race, similar feeling of just running on empty, I also thought how easy 6 foot seemed compared to Jungfrau. The aid stations were pretty good but I couldn't really understand what they were saying, water and energy drink were available, sometimes Coke and sometimes Bouillon, weird, not great downing some soup when you think it's water. 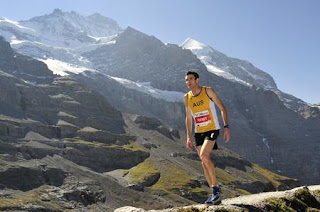 The view of the mountains was amazing at this stage, the whole wall of Junfrau, Monch and the Eiger was climbing directly ahead. The scenery gets better as the real killer of the race comes in the last few km, a stupidly steep rocky path heads up and up. I was talking to an American after the race who finished a few minutes in front of me and he said it took him 35min to run the last 3k, it was crazy. I was barely moving here and starting to feel a bit sick, really just trying to keep moving. There were still some guys going past but everyone was dying. I saw some footage after the race of the leaders and even they were looking pretty bad at the end. I accepted some coke off a random spectator (wouldn't normally advise this) and plodded to the highest point of the course then amazingly started running really fast on the final 1k downhill to the finish. I even sprinted past the 5th American on the line before collapsing. I was handed an energy drink and a beer straight away, tried hard but couldn't even finish the beer, that's how bad I felt.

That was it, 62nd on the day I think, amazing race, great atmosphere, scenery, organisation, support but extremely tough. I think the flattish first half makes it hard to pace as well. One of the Welsh guys was just behind me at 25k and ended up about 12th so it shows if you can push the second half there is much time to be made up.

I had a swim in the hotel pool afterwards and had some beers with the Aussies and the US and British guys at night which was great. DJ Otzi was playing in the main tent at the after party but I wasn't in the mood for dodgy Eurotrash pop music so just had the beers then off to bed.


There are some good runners in the field, quite a few sub 2:20 marathoners up front, met several other guys who are around 2:20 for the marathon so plenty of speed going around. How could I do better in this race? Could probably start off even slower, I felt comfortable enough in the first half but even a few minutes slower might make a big difference towards the end, the women's winner on Saturday was about 87 min at half-way then finished in 3:22. Find a 15km steep hill to train on, the first steep hill is tough and there is just no chance to recover afterwards. Interestingly I had no muscle soreness at all in the days after the race, I guess it's because there is virtually no downhill running at all so the legs don't get smashed so much, I did a couple of easy runs in Hyde Park in London during the week and felt great.
Posted by Tucks at 3:02 AM