My first 100k race is over and it went amazingly well. I thought I'd start this blog so I can record my thoughts on the race and make some notes for next time about what worked and what didn't.

Lead-up
Earlier in the year I was thinking about aiming high for this race and even dreaming of a 10 hour finish which I thought was possible if everything went well. By the middle of Feb I was down with a mystery virus which was to affect me for about 6 weeks, I managed to get out running a lot but couldn't handle any long runs of faster sessions. Still managed a lot of shorter runs during this period but my confidence for the north face was down a bit and I was starting to think about just getting through the race rather than have any time plans.

The come-back started with a 50k out-and-back run on 6 foot track at Easter, I struggled over the last 10k but was glad to get through it. A few more long runs including a 40k run on the course (on the day Mt Solitary was cancelled) with a group including Rob Costello started to get a bit of confidence back although I remember finishing the run thinking I would never be able to run another 60k after that. This training run would prove to be even more important come race day. We then had a week in Fiji 2 weeks before the race, I managed to squeeze in some short beach runs while there and also avoided destroying myself on the buffet and beer which was my biggest fear.

Planning
Originally I wasn't sure about having a crew and had almost decided on using drop bags when my mate Phil said he was available to help. We had a chat about what to do and that's when I realised I had no idea what the plan was. Decided on a pretty simple strategy in the end, staminade (cheap and easily bought at the supermarket), gels by the flask and a few energy bars would be the nutrition plan. Also decided to have a lot of coke on stand-by, I don't drink it a lot but whenever I see it on a table in a race I go straight for it. The race plan was just to try and find a sustainable pace and stick to it, then work things out as I went along. I honestly thought 10 hours was a bit out of reach and 10.5 hours would be a great time but was prepared for 11-12 hours if it came to that. 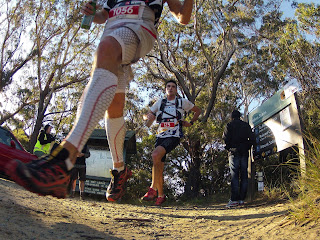 Great excitement at the pre-race gear check and bumped into a lot of people I know then back the next morning for the race start. It was a lovely cool morning in Leura, I was handed my GPS unit for the athlete tracking and basically the race started after that. Settled into a good pace and let the early leaders go. I was surprised by the running to CP1, lots more stairs and technical stuff than I was expecting which was draining the legs. Ran along narrowneck chatting with Grant Guise, Mick and Brendan ahead and a few others not too far away. After the ladder I ran with Grant and Matt Cooper for a while, there were no markers on the turning for CP2 but luckily I remembered the route from the training run - others weren't so lucky. We kept looking closely at the ground for foot prints to make sure it was the right way until we came out at Dunphy's for CP2. I took ages here, had no idea what I was trying to do, tried to eat some watermelon then got some endura and a gel and took off in chase of the others who were way ahead by now.

Ironpot ridge was a struggle, really steep climb and descent but at least I saw the leaders coming back the other way (other than Ryan). Managed to get clear of Grant and Matt and was on my own running though the paddocks and farms back towards Megalong Rd. Caught up to Andrew Lee on the road section and we had a good chat about how the race was going. Felt good that I was running with a top runner who knew the course so well, we were comparing our time with his sub-10 hour splits from 2010 and figured we were about the same pace. I still didn't think I could keep the pace up, just felt like my legs were too drained, felt slow even on the flat sections of Megalong and we weren't even half-way yet.

Got a slight lead on Andrew and came into CP3 alone. Great feeling here, first site of the crews and all were supportive and it was like a little festival. The gels were fine but the hammer bars seemed to be affecting my stomach so I spent a few minutes in the toilet while Phil went to work swapping drinks and gels. Drank a heap of coke before leaving, then back on the trail to Nellie's, surprisingly still holding onto 6th place.

After the caffeine and sugar rush of the coke had worn off (it's great for about 500m) I was slogging my way along the road towards the dreaded steps, I knew I was a few minutes behind Mick, Brendan and Vajin so was running completely on my own. At this stage I was even walking some of the lesser hills so tried to just remember to eat the the gels and drink enough. I was a bit dehydrated coming into CP3 so I went through the drink I had pretty quickly on this section. The climb up Nellie's was tough but I just kept going with burning quads, didn't even think of trying to run any of it. Came out into the sunshine and started running again, was shuffling a bit so kept reminding myself to try and run a bit faster when the track allowed. This seemed to help, I think it's important to avoid getting used to the slow shuffle. Before long I was on the roads of Katoomba and into CP4 running pretty well. Bit slow swapping the bladder over in the pack but this is where I realised it's useful having a crew, I kind of spaced out a bit here while Phil sorted things out with the pack. I picked up an extra water bottle because of the long stage to come then set off in chase of Mick who had only just left and was clearly struggling a bit. 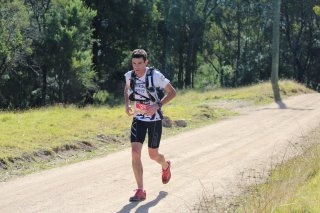 Passed Mick with a thumbs-up at about 70k then ran through the Katoomba back-streets and towards the tourist hub of Echo Point. After so long on my own it was a shock running through the crowds near the three sisters. I had to weave my way through people and at the stairs I was stopped dead, the whole staircase to the three sisters was blocked by tourists going down and coming up. I asked them to move politely then lifted my bag over my head and pushed my way through the middle until I could move again and eventually reached the trail in the valley. This next section was probably the best of the race for me, I felt fast along the single-track through the trees and then onto the big downhill on the dirt road. My garmin battery died at about 75k but I knew I was still under 10 hour pace and I started to think it might be possible to catch Brendan and Vajin. This was the point when I was pretty confident of getting through the race in decent shape, I realised that even though I was having slow patches and doing some walking my overall speed was pretty good and I guess that feeling is part of the experience. I also knew Kedumba pass was coming and this could have a big impact on my time. What I didn't expect was the tough section before Kedumba, it seemed to be a few k's of tough climbing and I was walking a lot with a few short runs thrown in. Even worse was the kids songs that started going through my head at the time, it seems when things get tough terrible High-5 songs appear to make things worse. I eventually reached the Kedumba climb and started the walk/run. I actually ran a lot more of this than I expected and it was over pretty quickly.

Had a good run into CP5 for the final push. I dumped the watch and unworn sunglasses and uneaten bars and stocked up on coke. I was about 1:40 behind Brendan going into the CP and went off in pursuit pretty quickly, again the coke rush lasting a short time before I came back to reality. Was pushing the pace along the road but I thought I'd have to settle for 4th when the track became more technical, it's not my strongest point and the legs were heavy. I was back to my just keep going phase, looking forward to getting to the end. Out of nowhere I saw Brendan at about 95k mark, didn't know he was that close. He seemed to be moving well but I managed to get past him and after a few words I pushed on towards the finish.

A seemingly endless trail of twists and turns and steps eventually led to the golf course then up the grass slope to the finish. Great atmosphere at the end, high-five by support man Phil who was great all day and across the line. I didn't even see the finish time, was talking to some people for a while before I noticed the finish clock just tick over 10 hours so just managed the sub 10. 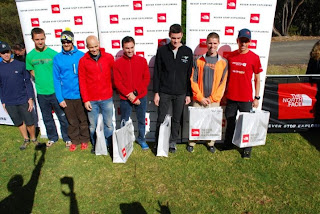 Conclusion
Great weekend, we went back on Sunday for the presentation and saw the last finishers at about 11am. Met some more great people and sitting here now am keen to try it again, I may not have said that if asked during the race. Great runs also by HuRTS members Rob and Jonathan and thanks for their advice pre-race.

- Shoes were great, Roclite 285's (thanks Barefoot Inc.)
- Very glad I had the 1 man support crew, drop bags would be OK but to have someone to have a quick chat to and handle the re-fuelling when your brain is not working properly is great. it was also good to know I had a change of shoes and socks available although I didn't use them.
- Definitely ditch the bladder in the pack, just takes too long to change over. Stick with 2 bottles on the front next time for speedier check points.
- I seemed to have lots of short slumps rather than the expected big slump. Most of these were cured with drinking and having a gel and by the end of the race I was taking more gels more often which helped.
- I ended up using just gels most of the way and it seemed to work well with the staminade.
- Coke, instant performance boost.
- Stay at the Fairmont, nice place and would've been good to hang around after the race a bit longer.
Posted by Tucks at 5:13 AM